Back then, in my young life, a pension was something for others to think about.  It was something in the distant future to work towards.  Your National Insurance Contribution (NIC) , that chunk of your wages that was taken away before you got it which went into some giant Government Pot and would give you an income on retirement.    If you were employed you might have the opportunity for a work place pension if you were a man, less so if you were a women, and even less so if you worked part time, or gave up work when you had children. And women worked until they were 60.

And now I’m here, and I find out my pension age will be 66.  The Government didn’t write to women born in the 1950’s and tell the women that they’d changed the age of retirement until 14 years later, some women are still waiting for that letter.  Their opportunity to replan and save more was gone.  I’ve found the whole concept of a State Pension is built on very sandy soil indeed. There is no big pot of money.  Today’s workers pay for today’s pensioners.

We’re living longer (although the rich are living longer than the poor and it does rather depend on where you live) and our NIC’s are not going to raise enough funds to provide a basic pension for all.  The criteria for getting a State Pension can change, the amount can change and the provision of it can be at the whim of the Government at any time.  And incidiously its now being referred to by some as “a benefit”, implying that you have to deserve entitlement.  In years to come there’s a real chance that it will be means tested.

It seems everyone now needs a financial adviser to help them through this minefield.  Your savings will earn you very little interest and if you have a SIP (self invest pension) you either leave someone else to manage it for you or you manage it yourself.  Don’t worry though its quite straightforward just follow the markets.  Here’s a simple diagram. 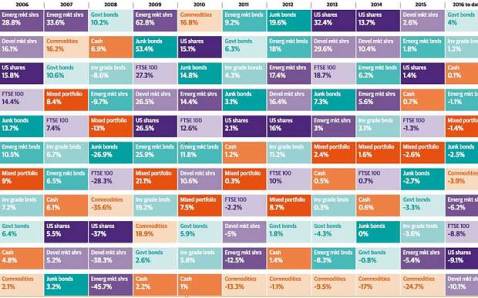 Young people today are paying for a State Pension they may never receive while at the same time paying into a compulsory Private Pension Pot. 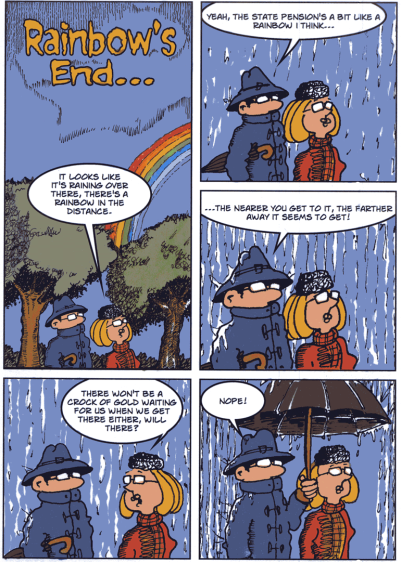 There are good ‘user friendly’ financial advisers and journalists out there who understand the pitfalls and keep abreast of the ever changing regulations and requirements.  They’re writing and commentating and we have to try hard to read and listen..

The Pensions Guru explains it all in comic strip form like the one above.

Jeff Prestige writes in the press regularly on all financial issues.

They, and many others are podcasting, blogging, commenting on Facebook and Twitter and sending e mail newsletters, working away to keep us informed and up to date.  Its a far cry from the lack of information of yesteryear.

Other Independent Financial Advisers (IFA) I’ve come across on Twitter and Facebook, who I wouldn’t let anywhere near my money,  smirk at my ignorance and tell me how foolish I’ve been. But FAIR WARNING you have to do your homework.  You have to get on it and look stuff up, be in touch with the Department of Work and Pensions for a pensions forecast, check and double check.  Keep paperwork and read it all thoroughly.  Never take anything for granted. If you’re looking for an IFA there’s help out there for that too.

And if you don’t understand something. Ask.

So if I was writing my own Life Manual to hand on to my daughters it would have a chapter (short) with everything I’ve found out about the benefit of saving early for later life, and in big letters at the end it will say KEEP AN EYE ON YOUR PENSIONS.

What would be in your Life Manual?

2 thoughts on “IF LIFE CAME WITH A MANUAL #1 Pensions”