With the recent publication of letters sent by  WWI soldiers at the front to their loved ones back home, it brought into focus for me the importance of the personal letter as a vital part of social history.  The heart breaking snippets of a life we can’t really imagine were such a part of the commemoration.

An envelope, addressed to you.  These days so often a bill, a bank statement or a bit of junk mail renders mail undesirable.  But a hand written letter is a different matter and a thing worthy of greater merit.

Sometimes when I look through old papers I come across something written to me in the handwriting of my mother, and it brings me up short.  Her huge, artistic, loopy writing.  So distinctive, and so much a part of her.  My father’s by contrast was minute and spidery, and often he will have written it out first in rough to make sure that his exact sentiments were being expressed.  He always knew when to write, and people remembered his letters. He used to talk about “the power of the pen”.  No-one remembers an e mail.  My grandmother’s writing was beautifully neat and expressive, and usually came with pocket money.

When I was first married Nick was at sea and we spent many months at a time apart.  In the days before satellite phones, or e mail.  So a letter took on great significance.   Even written letter exchange was tortuous and unpredictable.  Sometimes I’d wait for weeks for a letter and then three would come at once.  In his characteristic and often illegible scrawl, usually in fat blue Rotring ink, on tissue thin paper with stamps from exotic places. 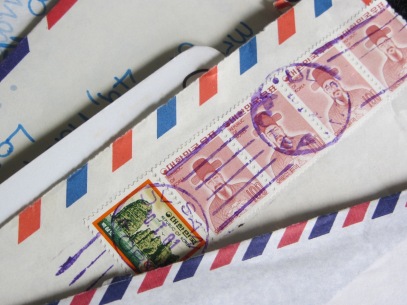 There’s the tale of the day the man in charge of mail in the shipping company office left unexpectedly and his desk was full to the brim of un-forwarded letters.  Stories and news never exchanged, cards and photos unopened.

Recently I joined a hand written letter exchange with a stranger.  I wasn’t optimistic, having taken part in a gift box exchange and not received mine in return.  Much to my delight I was matched with Amy in Cincinnati, Ohio.  Trust me when I tell you Amy really knows how to write a letter.  She burst out with a hand water coloured postcard from an exotic holiday destination and a little later a hand written letter, on the thickest paper torn from her sketch book.

The envelope stuffed full of little pictures, stickers and photos of her life, which is nothing like mine.  In my British way I have responded with stories of life here in England, photos of my garden and my City, stories of where we live, how we live and of course we’ve discussed the weather.  My pen pal is creativity in spades.  She paints, embroiders, gives classes, is musical and mystical.  By comparison I am pretty staid, and my life is quieter.  But we can exchange mental pictures of our lives.  I must become more interesting!

The sitting down and thinking ‘what to say’ is a discipline and a pleasure.  The slow scratch scratch of pen on paper concentrates the mind on how to express things.  The joy of a clean sheet of paper and a crisp envelope.

Have you ever struggled with a letter?  A letter of resignation, the Dear John ending a relationship,  the one to a bereaved friend.  I only know with the latter that anything is better than nothing, and a letter to be read later when the reality sinks in is worth the effort you take to find the right words.

More importantly take the time to write a letter to the people you love most.  Tell them you love them, in your own best handwriting.  Even if they’re hard to love tell them something you admire about them.  Everyone wants to be valued. Everyone wants a memory to treasure – for when its too late.