There are four easily discernible behaviours – in contemporary Government responses to the SPA injustice – that suggest a future agenda on State Pensions: one of abolition, not nurture. The WASPI campaign needs to raise awareness of the broader rights at stake.

Yesterday, Dame Joan Bakewell asked the Government in the House of Lords when they were going to confront the disgraceful – and utterly mendacious – handling of the State Pension Reform that began in 1995. The ‘reform’ process was about as informed and fair as the British media’s coverage of the ongoing rape of Greece. Except that in this, the case of Dame Joan’s query, our media chose to ignore it completely.

I’m sorry, that’s a little unfair. BBC Parliament covered the event live, because that’s what they do. Googling today, I’d say not many people were tuned in*: they’d turned off and dropped out: 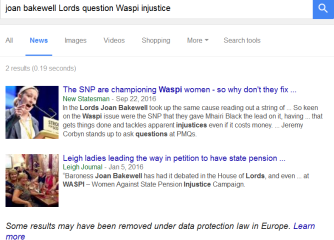